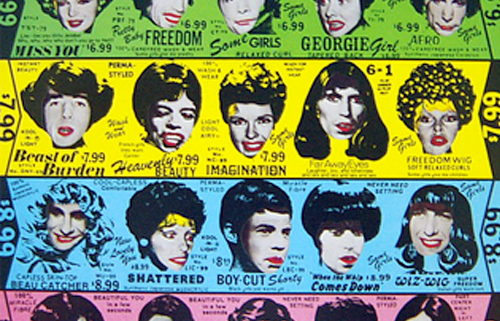 Pure Music Manufacturing presents a look into the history of iconic album cover art in this feature titled, ‘Behind The Cover.’ This installment looks at a classic Rolling Stones Album.

‘Some Girls’ was the 14th British and 16th American studio album for the Rolling Stones. It was released in 1978 and was the first album that included guitarist Ronnie Wood as a full-time member of the band.

This release soared through the charts topping the Billboard 200 as the Number One album. It went on to become the Stone’s best-selling record in the US and earned the band a Grammy nomination in the Album of the Year category. ‘Some Girls’ had a handful of singles come from it that became chart staples in the US, UK, Australia, and Canada.

The cover art was a whole different matter. It involved an elaborate die-cut design. An old copy of a Valmor Products Corporation print ad was used with faces of the Rolling Stones and various celebrities inserted. The idea was conceived and designed by Peter Corriston with illustrations from Hubert Kretzschmar. The colours on the sleeves had several variations, depending on the market the album was sold in.

Then there was a controversy – the cover art became the source of legal action when some of the celebrities whose faces were used threatened to sue the Stones’ for using likenesses without permission. The list of angry celebrities included Lucille Ball, Farrah Fawcett, Liza Minnelli (on behalf of her late mother Judy Garland), Raquel Welch and the estate of Marilyn Monroe.

Valmor also jumped into the legal arena and received an undisclosed cash award for the unauthorized use of their ad design.

The legal pressure forced a quick re-issue that saw the album cover redesigned with the celebrity faces removed, including those that did not launch legal action. Well, that was with one exception. Ex-Beatle George Harrison’s face remained but all the others were replaced with black and punk style garish colours. The wording “Pardon our appearance – cover under construction” was added to more or less explain the somewhat unpolished look of the cover.

Hand-drawn faces were used in a third version of the album cover which accompanied a 1986 CD reissue along with the original Valmore ad design.

It is also interesting to note that although the cover art of ‘Some Girls’ did ruffle the features of some fairly big-name celebrities, the designer did not get penalized by the Stones. Instead, Corriston was commissioned with the task of designing the next three album covers for the band.

Oh, and Rolling Stone lead singer Mick Jagger apologized to Minnelli one night at a party the two attended at the New York discotheque Studio 54.

Aerosmith Is Really Pumped About Their Tenth Album