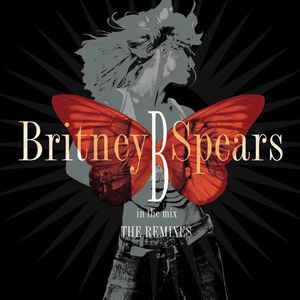 Spears Takes A Stab At Her First Remix Album

Pure Music Manufacturing proudly presents this look at the story behind the music and artwork on the cover of an iconic album from the past few decades. This feature is called Behind The Cover and reveals details that are not normally publicly known.

The first remix album by American recording artist Britney Spears was released in November 2005. It was titled, “B in the Mix: The Remixes.” The album contains remixes done by DJs including Peter Rauhofer and Stuart Price. The material used came from Spears’ first four studio albums: 1999’s “…Baby One More Time,” “Oops!…I Did It Again” from 2000, “Britney” (2001) and the 2003 release “In The Zone.”

Music critics gave the remix album mixed reviews which spanned the spectrum. Some thought it was a good remix compilation and others saw it as a gimmick that featured weak vocals. Regardless, it soared up the US Dance/Electronics Album Chart peaking at Number 4, spending 21 weeks on that chart. It made it only to #134 on the US Billboard 200 Chart. However, the album sold 14,000 copies in the first week it was released and spent 11 weeks on that chart. To date, over 131,000 copies of this remix album have been sold in the United States. It debuted at #99 in Belgium, #59 in Italy and peaked at #25 in Japan.

If you have never heard of this Spears release, you would not be alone as it happened to receive very little in the way of promotion compared to the rest of her music catalogue. One music source referred to it as an album that was being marketed “in a more underground way” than would normally be associated with a big name act.

However, the record company did release an EP in September 2005 to help promote the remix album. The EP, titled, “Key Cuts from Remixed” contained five tracks and was distributed primarily to DJs in both vinyl and CD formats. It must have had some influence when you consider the speed in which copies were being sold the first week the album was released to the public.

The album was going to be called “Remixed” but was changed to the long and slightly confusing “B in the Mix: The Remixes.” Oddly enough, the album also has two different cover artworks. One is for the North American market and the other for the international market. Spears does not appear on the cover of the North American issue. Instead, there is a stylized outline of a butterfly in red. The difference in the international issue is that a black-and-white photo of Spears appears behind the butterfly graphic.

Pure Music Manufacturing is a CD manufacturing company based in Manchester, UK. They can take care of all your CD/DVD replication services and aim to be your one-stop source for these services. From pressing and packaging to anything else your project requires, contact Pure Music Manufacturing. They have several different packages designed to meet your project requirements as well as your budget.