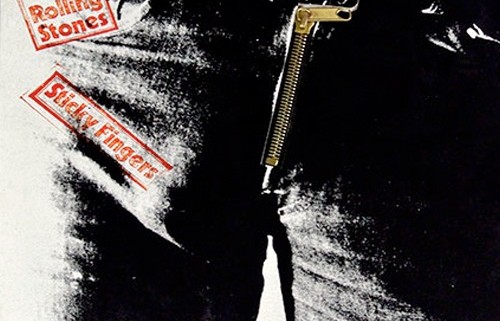 Happy New Year and welcome to another instalment of Pure Music’s ‘Behind The Cover.’ This is where we will explore the stories behind some of the most iconic album covers that have been created.

Sticky Fingers was the 9th British and 11th American studio release from the Rolling Stones. It hit the market in April of 1971 but the album cover art dates a little before that. It was actually in early 1969 when Andy Warhol agreed to provide artwork for an upcoming album by the group.

Mick Jagger had been in contact with Warhol via letter and basically outlined his vision for the project. Jagger wanted something that was simple and uncomplicated. His reasoning was that the more complex the design, the longer it took to get the product on the street.

Warhol did the opposite.

In fact, by ignoring Jagger’s suggestion, the Sticky Fingers album became one of the most iconic – and complicated – album covers in history. And it all started with a photo of a male crotch.

The process involved photo shoots of several men from the waist down. The final product features a close-up of a male crotch in blue jeans with an actual zipper installed. When you lower the zipper, another partial view is revealed of a male crotch covered in underwear.

Legend has it that the photo is of Jagger’s jeans and crotch but that is far from the truth. Warhol took the photos at the offices of his Interview Magazine. The editor at the time, Glenn O’Brien claims that the ‘underwear’ crotch shot is of him.

“I knew it was me because it was my underwear.”

O’Brien earned $100 for the 20-minutes of his time that it took for the photo. According to O’Brien, he believed the jeans photo is of makeup artist Corey Tippin. Tippin confirmed the suspicion stating, “I know my anatomy.”

Chances are that Warhol did not know the true identity of either model as he would have likely placed all photos on a tabletop and picked the two he liked best anonymously. Regardless, the album cover has been since released minus the zipper.

Other international versions of the cover saw a Soviet Army belt buckle photoshopped into the Russian release. In Spain, a can of blood with a set of women’s fingers protruding from it completely replaced the zipper cover art.

As mysterious as the album cover may be, it did become one that frequently appears on Top Ten Lists of the Best Album Covers Ever Created. When you consider it dates back over 48 years, that says a lot about brilliant design which can stand the test of time.

Pure Music Manufacturing is a company that manufactures CDs. Based in Manchester UK, they provide a wide range of CD manufacturing / DVD manufacturing services including pressing and packaging. Pure Music aims to be your affordable, one-stop CD replication service and offers many different packaging options to fit your budget and requirements.