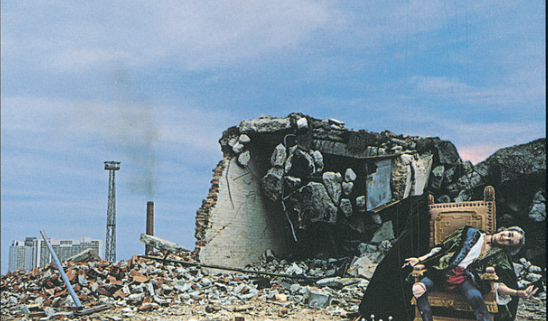 The story behind the music and cover artwork of an iconic music album are examined closely in this feature. Called Behind The Cover, this new instalment is proudly presented by Pure Music Manufacturing.

Canadian rock band Rush released their fifth studio album, “A Farewell To Kings” in September 1977. It came on the heels of a massive and long tour in support of the band’s previous release, “2112.” In fact, rather than taking a break following the 16-month tour, the band rushed into the follow-up album that became “A Farewell To Kings.” This new album was also the first one the band had recorded outside of their hometown of Toronto, Ontario.

The studio selected was in Wales and the seclusion of being so far from home and the mellow atmosphere at the studio ended up creating the type of environment that proved to be very productive for the band. It also gave them their first opportunity to record some of an album outdoors.

As for the album itself, it was recorded in just three weeks and another two weeks were spent on mixing. Drummer Neil Peart, who recently passed away in January 2020, said at the time of “A Farewell To Kings” that the band sound had been “confined” with their previous album and so the group purposely chose to write material that required instruments that the band could play naturally along with some new ones. It also meant that when performing these songs in concert, the musicians could play multiple instruments.

The plan was a good one as the album charted well peaking at Number 33 on the US Billboard 200 and Number 22 on the UK Albums Charts. There were two singles from the release. “Closer To The Heart” only got to the 76th position on the US Hot 100 but fared better in the UK climbing to #36. “Cinderella Man” was the other single. The song “Xanadu” had been performed live on a short tour in 1977 before it was recorded and “Closer To The Heart” was in the developmental stage when the group entered the studio. The rest of the music for this album was created in the studio.

The cover art was designed by Hugh Syme who had been a long-time Rush collaborator. The design for the album had been started sometime before the group went into the studio to record. It was developed from an idea that had been pitched to Syme by the band. A Boston demolition site is featured in the composite photograph along with the Harbour Castle Hotel in Toronto filling the background. A retouched human figure that resembles a “grotesque puppet” is in the foreground. All of these represented specific themes that are addressed in the title track, “A Farewell To Kings.

At Your Birthday Party Album Cover