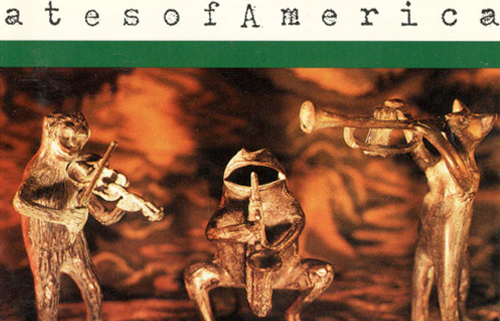 The Presidents Of The United States Of America Album Cover

This is ‘Behind The Cover’ – a detailed look at the story behind the music and the cover art of some of the most iconic albums in music. It is brought to you by Pure Music Manufacturing, a CD replication service featuring pressing and packaging for your next indie CD release.

As any marketing firm will tell you, part of a dynamic image for a product of any kind is the name that is used. The same principle applies to music and that is why most bands have catchy, memorable, short names. Where The Presidents of the United States of America scored high on that part of their image was that the name they chose to call themselves got your attention – even if it was quite a mouthful.

The group with the memorable – and long-winded name – burst into the world of music with their self-titled debut album in March 1995. The American alternative rock group hit the music radar during the grunge and punk music breakthrough-era and saw a total of four singles come off of their disk that was originally released independently.

Subsequent re-releases featured several differences in content and artwork. For example, one released featured a photo of the band with Bill Clinton on the inner sleeve. It was taken at the time that Clinton was an actual President of the United States of America.

A food inspection stamp design for the front cover art appeared in the CD release of the album where the original indie release on Seattle’s PopLlama label featured yellow vinyl and two bonus tracks.

But these were not the only variations that existed. It was as if each time the incredibly popular album was reissued, there were several changes made as if the intent was to encourage collectors to purchase each release to have copies of all variations.

An example of this was with the July 1995 re-release. This version had an inside cover photo of the band members (appearing in multiple pictures) all painted in red, white and blue – the colours of the US flag. The CD version of that release had a cover that looked like a vinyl record label and featured completely re-mixed versions of all songs.

Another re-release in 2008 saw the return of the food inspection label cover art that was used with the original 1995 debut edition. This time around, the inside cover photo has a collage of photos taken during various live performances of the band. The liner notes in this re-issue are also slightly updated.

Regardless of the many different variations, one thing never changed – the band’s name.

‘Some Girls’ Didn’t Like Being On A Rolling Stones Cover

Queen Champions the “News of the World’
Scroll to top