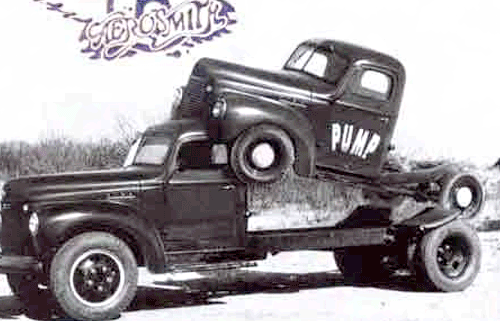 Here is another installment of our feature ‘Behind The Cover.’ Brought to you by Pure Music Manufacturing, this is where we dig a little deeper into the story behind some of music’s best album covers.

The tenth studio album released by American rock band Aerosmith was released in September 1989. It was titled, ‘Pump’ and produced a total of six singles including ‘Love In An Elevator,’ ‘Janie’s Got A Gun’ and ‘The Other Side.’ The first single hit #5 on the Billboard Hot 100 and topped the Hot Mainstream Rock Tracks chart. ‘Janie’s Got A Gun’ went to #1 in Australia, the band’s first #1 hit there. It peaked at #2 in the US and Canada. ‘The Other Side’ hit #22 in the US.

The album was a commercial success having certified sales in excess of 7-million copies in the US. The sound of the album shifted slightly from the customary rock with the inclusion of keyboards and a horn section which figure prominently in many of the singles from this disc. It also gave Aerosmith several firsts in their long musical career. They received their first Grammy Award for ‘Janie’s Got A Gun’ and the album is their first to date to have three top 10 singles on the Billboard Hot 100 chart as well as three #1 singles on the Mainstream Rock Tracks chart. It was the fourth best selling album of 1990. It was also the band’s second album to be certified Silver in the UK recognizing sales of over 60,000 units.

The cover art features a black and white photo. In it are two trucks – a smaller International K Series truck on top of a larger International KB Series truck. In place of the chrome International logo on the side of both hoods are the letters F.I.N.E. which are defined in the album liner notes as being an acronym for ‘F’d Up, Insecure, Neurotic and Emotional.’

The album title came from the current state of the band which has had a notorious history of being in and out of rehab. According to band member Brad Whitford, “Now that we’re off drugs, we’re all pumped up” was shorted to the word ‘Pump.’

A fear from the record company affected the packaging. They worried about protests possibly coming from the Parents Music Resource Center regarding the sex and drug references that lace the content of many of the songs on the album. That led to the decision to not include lyrics in the album booklet. Lead Singer Steven Tyler has since stated he regretted the move but the band did get around that by putting song lyrics in their ‘Pump’ tour programme.

Pure Music Manufacturing is a CD manufacturing company based in Manchester, UK. They offer a number of different CD and DVD manufacturing services. Those services include pressing and packaging of your product. Pure Music aims to be your solitary source for all your CD replication requirements. They have designed their services to be affordable and to meet the needs of your specific project.

Sales Keep Chasing the ‘Band On The Run.’