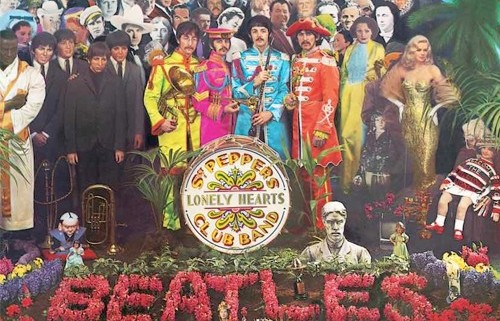 In this installment of Pure Music’s “Behind The Cover” we will take a look at one of the most interesting album covers ever produced. This one was for the super group The Beatles, who were pretending to be another super group.

Blake had come up with the idea that the cover could be a scene of the band just after playing a concert in a park.

“The cover could be a photograph of the group just after the concert with the crowd who had just watched the concert, watching them.” Blake added that by using cardboard cutouts, the “magical crowd could be whomever they (The Beatles) wanted.”

Paul McCartney claims to have given Blake and Haworth an ink drawing which the cover art design was based upon. It included art direction from Robert Fraser and was photographed by Michael Cooper.

The from cover was a colourful collage of 57 life-sized cardboard cut outs of famous people as well as nine waxworks plus the four members of the band. The Fab Four were each dressed in costume as the Sgt. Pepper’s Lonely Hearts Club Band and each had a heavy moustache. The facial hair idea came from George Harrison who had first grown one as a disguise while vacationing in India.

The centre of the cover had a bass drum that The Beatles were standing behind. Fairground artist Joe Ephgrave painted the album’s cover title on it and the word ‘Beatles’ appeared in front of the drum in an arrangement of flowers. The costumes worn by the band were created by theatrical costumer M. Berman Ltd. of London.

As a finishing touch, the Beatlemania era wax sculptures of the Fab Four, borrowed from Madame Tussauds, were standing right next to The Beatles posing as Sgt. Pepper’s Lonely Hearts Club Band.

John Lennon had requested life-sized cardboard cut outs of Adolf Hitler, Mahatma Gandhi and Jesus Christ but they were all rejected. One cut out did get painted out. That was of actor Leo Gorcey who had requested a fee for the use of his image.

As for not including Elvis Presley in the scene, McCartney said. “Elvis was too important and too far above the rest to even mention…he was more than merely a pop singer.”

The final collection included musicians, film stars, sports figures, comedians and scientists. Essentially, the cover represented a guidebook of the cultural topography of the decade.

While album cover art in 1967 would typically cost around L50, this one totaled nearly L3,000.

Pure Music Manufacturing is a CD manufacturing company based in Manchester, UK. They offer a huge selection of CD/DVD manufacturing services including pressing and packaging. Pure Music aims to be your affordable, one-stop CD replication service. They can meet every budget and requirement with the many different packaging options they offer.