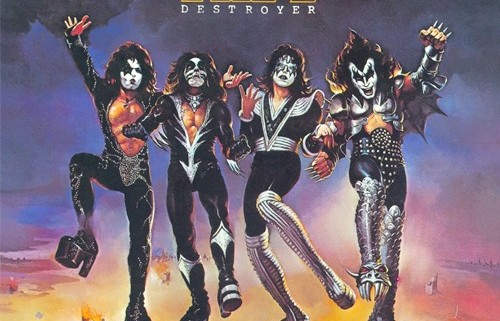 Welcome to Pure Music’s ‘Behind The Cover.” This is where we will take a closer look at the story behind some of the most iconic record album covers from the past few decades.

American rock band Kiss released their fourth studio album in March 1976. It was titled ‘Destroyer’ and their record label, Casablanca, rejected the first version of the cover art due to the violent nature of the image. It also had another error that caused it to be pulled before a single copy of the album hit store shelves.

The cover art was the work of fantasy artist Ken Kelly. He had been invited to a Kiss concert and given a backstage pass. The idea was to give Kelly full exposure to what the band was like during an electrifying performance.

“It blew me away,” was how Kelly described the experience.

His album cover art depicted the four members of Kiss walking across the top of a pile of rubble. The background of the scene was desolate with destroyed and burning buildings dotting the landscape.

Casablanca executives didn’t like the cover saying the rubble and flames made the scene appear “too violent” an image for the theatrical band. Plus, there was another mistake. Kelly had drawn the musicians in the band wearing the costumes they had during their Alive! Tour which had changed considerably for Destroyer.

So a tamer version of the cover was drawn. This one was known as the ‘blue’ cover with the rejected one referred to as the ‘brown’ cover. Record execs gave the revised cover art the green light and albums were packaged with it. In fact, it was the Destroyer cover that cemented the image that represented Kiss until their next album was released the following year. Interestingly enough, Kelly was the artist for the album after that release – one called Love Gun.

On that cover the members of Kiss are in different Love Gun costumes on a stage that is surrounded by adoring female fans in white face makeup.

To mark the 35th anniversary of the release of Destroyer, which earned Kiss their first-ever platinum album, original tapes were remixed with some additional parts added. Probably the most interesting change to the album, which was released in August 2012 as Destroyer: Resurrected was that this time around Kelly’s original cover art was used – as violent as it apparently was with Kiss in the wrong costumes.

It was far from the only controversy the band would find themselves in during the 1970s and beyond. Eventually they dropped the makeup, brought it back and embarked on what was said to be their final tour set to end in 2019.

Pure Music Manufacturing is a CD manufacturing company. They provide a varied selection of CD/DVD manufacturing services including pressing and packaging. Based in Manchester, UK, Pure Music aims to be your one-stop, affordable CD replication service. They offer different packaging options designed to fit every budget and requirement.

Springsteen Captures The Ultimate Everyman With Born In The USA

With A Little Help From My Friends – The Beatles “Sgt. Pepper” Album ...
Scroll to top