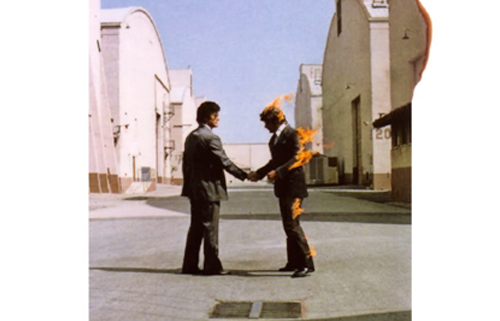 Wish You Were Here Album Cover

Pink Floyd Avoids Getting Burned With ‘Wish You Were Here.’

This is ‘Behind The Cover’ a feature presented by Pure Music Manufacturing where we examine the music and artwork to the iconic Wish You Were Here Album Cover. This time around we visit the deeper meaning behind an amazing Pink Floyd release. The ninth studio album by English rock band Pink Floyd was released on September 1975 and was titled, “Wish You Were Here.” The album contains mostly material that had been written while the band was touring in Europe and was recorded in London’s Abbey Road Studios throughout several sessions earlier that year.

The packaging used for this album was one of the most elaborate designed for a Pink Floyd album and was the work of artist/designer Strom Thorgerson. Thorgerson had been with the band throughout their 1974 European tour and spent a great deal of time listening to and considering the theme behind the lyrics of the songs that ended up on this disk. He found that the main message in the lyric content was leaning towards an “unfulfilled presence” and that got him thinking about how to present that in the packaging of “Wish You Were Here.”

Thorgerson copied an idea from the “Country Life” album by Roxy Music where the packaging partly hid the cover image. This led to “Wish You Were Here” being sold in black-coloured shrink-wrap which was to denote that the album was “absent.” The often empty gesture of a handshake was also used as a symbol in the packaging with two mechanical hands engaged in the gesture appearing on a sticker on the shrink-wrap as well as on the album label.

The Wish You Were Here Album Cover photo, designed by Hipgnosis and photographed by Aubrey ‘Po’ Powell, was inspired by the fact that people tend to mask their true feelings to avoid ‘getting burned’ so two businessmen are featured shaking hands with one of them on fire. Two stuntmen were used for the shot and when it was ready to be photographed, the wind blew in the wrong direction burning the one stuntmen’s mustache. They reversed positions, the photo was taken and was reversed in post-production.

The back cover has a faceless salesman “selling his soul” according to Thorgerson in a desert scene that was shot in California’s Yuma Desert. The inner sleeve features a nude woman concealed by a veil in a windswept Norfolk grove as well as a diver at Mono Lake that hits the water minus a splash. All of these images were used to depict the theme of absence.

The band’s US record company was not pleased with the black shrink-wrap treatment hiding the album cover – and the album – and insisted on a change but the band held its ground. When they were first presented with a pre-production mockup of the packaging, the band was so pleased with it that they broke into spontaneous applause.