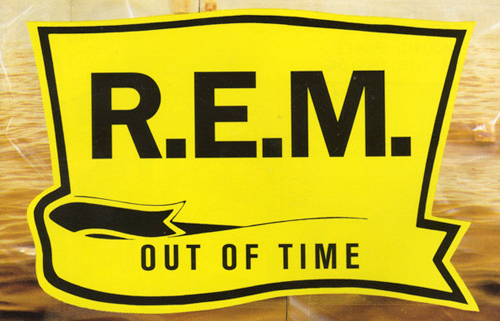 Out Of Time Album Cover

Pure Music Manufacturing presents this installment of ‘Behind the Cover.’ This is a feature where we dig into the story behind both the music and the cover art of an iconic album released sometime in the past few decades. This time around, we take a look at a disk from R.E.M.

The seventh studio album for American alternative rock band R.E.M. was titled ‘Out of Time.’ It was released on March 1991 and turned the band from a cult favourite to a huge international draw. The album topped charts marking album sales in both the US and UK and went on to spend 109 weeks on the US Album Chart with two separate visits to the Number One position. It also had a 183-week lifespan on the British Album Chart with a one week visit to the Number One spot. ‘Out of Time’ has sold well over 5 million copies in the US and over 18-million around the world. Plus, the disk took three Grammy Awards in 1992 including Best Alternative Music Album and two for the single, “Losing My Religion.”

As for the Out Of Time Album Cover, the packaging got somewhat more attention than the actual artwork. Warner Brothers executive Jeff Gold, working with Jeff Ayeroff, the co-founder of the Rock the Vote campaign approached the band with an unusual marketing idea. A petition was proposed to be printed on the back of the CD long box in the US which would encourage buyers to sign in support of the Rock the Vote, along with the Motor Voter Act.

Essentially, the plan was to see voters able to register at their local DMV. R.E.M. was approached simply because Gold figured the mostly young music buyers would be able to use their voting influence to crush the controversial Parents Music Resource Center music censorship bill. It was also viewed as a good way to make use of the long box format packaging that was largely considered wasteful.

R.E.M.’s Michael Stipe even promoted the idea in a public service announcement and in 2014 the packaging used for ‘Out of Time’ was considered “the most politically significant album in the history of the United States.” Data showed that three weeks after the CD was released over 10,000 petitions had been received with many more to follow.

The bill did pass in 1995 by US President Bill Clinton and credit was given to the clever marketing campaign that stated the situation happened “in no small part because of R.E.M.’s lobbying.” Who said music wasn’t political? In this case, music provided a voice – a somewhat different voice – of the people that resulted in action. It also proved that music can reach and inspire people to push for change.

Queen Champions the “News of the World’

Wish You Were Here Album Cover
Scroll to top