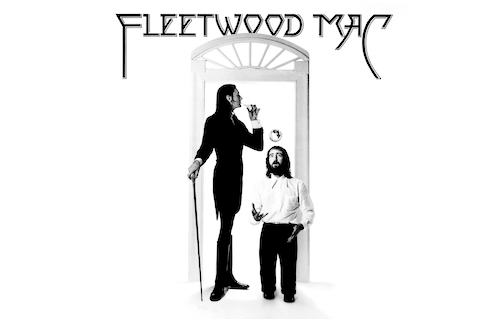 Pure Music Manufacturing presents another installment of ‘Behind The Cover.’ This is where we take an iconic cover from an album released in the past few decades and reveal the story behind it and the music on the disk.

The tenth studio album by British-American rock band Fleetwood Mac was released in July 1975. It carried the title, ‘Fleetwood Mac’ just as their 1968 debut album did, however, to fans of the band, this release became known simply as “The White Album.” The band line up had changed slightly before the release of this album as Bob Welch left in 1974 and was replaced by vocalist Stevie Nicks and guitarist Lindsey Buckingham.

There were three top twenty singles to come from this album including “Over My Head,” “Rhiannon” and “Say You Love Me.” The album topped the Billboard 200 Chart over a year after it first entered the chart. It also sat within the top ten for 37 weeks and within the top 40 for over 15 months. “Fleetwood Mac” was certified 7x platinum by the RIAA to recognize that over 7-million copies were sold in the US alone.

Regardless of the chart and sales success, the album was initially met with modest attention when it was first released and extensive touring in the months that followed helped. Speaking on the topic, Stevie Nicks was reported as saying that “We just played everywhere and we sold that album…we kicked that album in the ass.”

The singles that were released from ‘Fleetwood Mac’ were all remixes and in the case of “Over My Head” a completely alternate take of the song was used as the single. All three songs are somewhat different from the album version. The same applies to the 2004 re-issue of the album.

‘Fleetwood Mac’ also has two very interesting distinctions. First, it was the album that helped turn the band into musical superstars giving them regular radio airplay that continued into their smash follow-up ‘Rumours.’ Second, the front cover continues an unofficial Fleetwood Mac tradition that has been a constant theme for all of their releases to date except their 1997 album ‘The Dance.” That constant happens to be an album cover that does not feature all members of the band. “Fleetwood Mac” only shows drummer Mick Fleetwood and bass guitarist John McVie. The mostly white cover of the album earned it the nickname of ‘The White Album’ although the cover for ‘Rumours’ is also mostly white and just features Mick Fleetwood and vocalist Stevie Nicks. Another example of the theme to not include the full band on the cover includes the album ‘Mirage’ which shows Lindsey Buckingham dancing with Nicks while Christine McVie looks on.

Wish You Were Here Album Cover