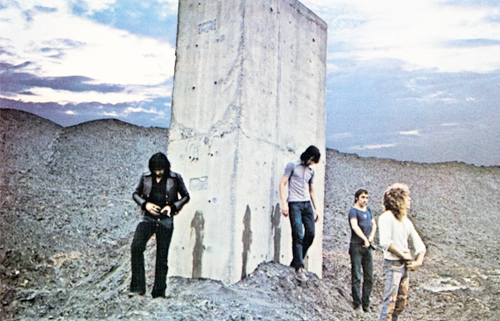 Welcome to another installment of ‘Behind the Cover.’ This is where we take a closer look at the story and details behind an album cover released in the past few decades. This feature is from Pure Music Manufacturing and this time around we examine a controversial album from The Who which contains some of their best recorded material.

English rock band The Who released their 5th studio album in 1971. It was titled, ‘Who’s Next” and was developed from a multi-media rock opera project by band member Pete Townshend that was abandoned. It was intended at the time to be a direct follow up to ‘Tommy’ which had been released two years prior. Various conflicts related to scheduling essentially killed the ‘sequel’ but parts of it carried into ‘Who’s Next.’

The album produced three singles and went on to hit charts worldwide. However, the album only topped the UK charts and became the only Who album to do so. ‘Who’s Next’ has become the best known of the albums by the band and is considered to be the best release of their history. Additionally, many critics have also named this as one of the best albums of all time. It has been re-released several times with some CD releases containing extra tracks that came from the abandoned Tommy sequel called ‘Lifehouse.’ Singles from the album have gained additional exposure and popularity due to their use in US television shows, most notably in the soundtracks of the CSI series of programs.

The album cover art is a photo of what appears to be the four members of the band in various stages of urination on a large concrete piling that is surrounded by rubble. Taken at Easington Colliery, the concept for the photo came from band members John Entwistle and Keith Moon. The pair had been discussing Stanley Kubrick and the movie 2001: A Space Odyssey. The photo was taken by photographer Ethan Russell who claims it was only Townshend who had actually urinated on the piling. Water poured from film canisters was used to produce the desired visual from the other members of the band. The sky was added later to the photo to give it the effect of being “other worldly.” A photo on the back cover shows the band backstage on a set of furniture debris at the De Montfort Hall, Leicester, UK.

The band did have other cover art ideas which all revolved around the foursome urinating on different objects but were never produced. However, an alternate cover does exist. It is of Moon dressed in black lingerie with a brown wig and holding a whip and did appear as an inside cover for two different CD re-releases.

Pure Music Manufacturing is a CD manufacturing company in Manchester, UK. They provide various CD/DVD manufacturing services including those related to pressing and packaging. Pure Music aims to be your one-stop source for all of your CD replication services. They have designed their services to address both your budget and the specifics of your project.

Def Leppard Breaks Into The Vault For Their Greatest Hits