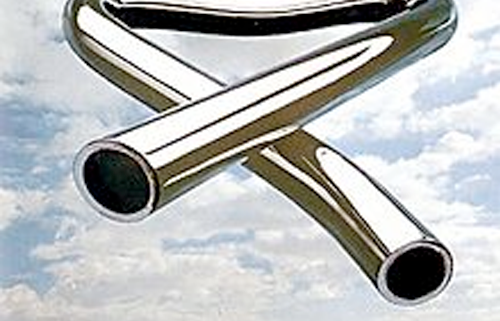 This is another edition of ‘Behind The Cover.’ Brought to you by Pure Music Manufacturing, this is where we take a closer look at the story behind an iconic album and album cover art.

English musician and composer Mike Oldfield released his debut album ‘Tubular Bells’ in May 1973. It contains just two compositions that were mostly instrumental and had running times of over 20-minutes each. Oldfield had recorded the pieces when he was 19 and it features him playing most of the instruments.

Sales were incredibly slow but picked up significantly when the horror film ‘The Exorcist’ (1973) used portions of the music in the motion picture soundtrack. By the following year, ‘Tubular Bells’ had hit #1 on charts in the UK, Australia and Canada. It reached #3 on the US Billboard 200 chart and became the third-best selling album in the UK of the 1970s. There are about 15-million copies of the album in circulation worldwide with over 2.6-million of them in the UK.

Designer and photographer Trevor Key created the album cover. The record company’s press officer had recommended Key for the job. He attended a meeting with his portfolio which included an image of a boiled egg dripping blood. The record company liked it as they were considering calling the album ‘Breakfast in Bed’ but Oldfield nixed both the title and image. A modified version of that image did end up on an Oldfield album, one titled ‘Heaven’s Open.’

The backdrop for the album cover was shot on the Sussex coast and Key had with him the bones that appear burning on the beach in the back cover photo. However, the day of the photo shoot was cold and it took a considerable amount of time to set them on fire. The seascape photo resulted from several hours of shooting by Keys until he got the one image that he was pleased with.

The actual triangular ‘bent bell’ that appears on the album cover was inspired by the damage that was inflicted on the real tubular bells Oldfield played on the album. Key designed the bell and once a model was made, he photographed it in his studio and added it onto the beach photo. The finished product greatly impressed Oldfield who insisted that the album name and his name appear in small letters in a pale orange colour of his choosing to not distract from the impact of the image.

Key apparently earned just 100 pounds for the album cover art but went on to bigger and better things in partnership with designer/photographer Brian Cooke. The Cooke-Key Associates agency worked closely with Virgin Records throughout the balance of the decade. In addition to designing the Virgin logo, they also designed several other album covers including many for Oldfield’s follow-up productions.