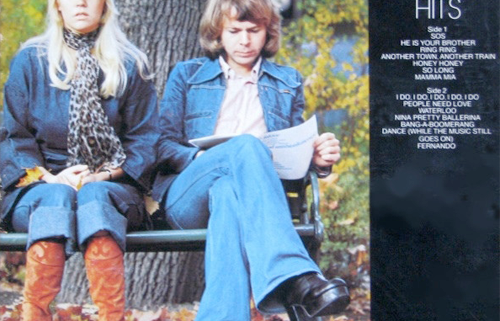 This is ‘Behind The Cover’ which is a music feature brought to you by Pure Music Manufacturing. The focus of this feature is the exploration of the story behind both the music and the cover of an iconic album released in the past few decades.

Swedish pop group ABBA released “Greatest Hits” in three separate releases in the mid-1970’s. The original came out in November 1975 in Scandinavia, the UK in April 1976 and the United States and Canada in September 1976. The 1976 releases also featured a brand new single. “Fernando” was originally released in 1975 but not as a song by the band. It was a song recorded as a solo effort by ABBA’s Anni-Fred Lyngstad.

At the time of its release, there had already been a number of ABBA ‘greatest hits’ type albums in the market. Each had been released by other record labels in different countries that had licensed the music for release in their respective territories. ABBA chose to release their own ‘greatest hits’ package to ease the threat of importation of any of the other existing ‘hits’ albums from impacting sales in the band’s home market.

The move resulted in the success of “Greatest Hits” only being felt in Scandinavia, the UK and North America. Regardless, it actually ended up becoming one of ABBA’s best-selling albums worldwide. According to the charts, the album went to #1 on the Norwegian Albums, Swedish Albums and UK Albums charts. It peaked at #2 on the Canadian Albums chart and only reached #48 on the US Billboard 200 chart.

There were a number of different covers that were issued with ‘Greatest Hits” depending on the market. A painting by artist Hans Arnold was used on the original Scandinavian release. It was actually awarded as a prize by a Swedish magazine in celebration of the band being selected as “Artists of the Year.” The painting was also used in a miniature replica gatefold sleeve that was part of the packaging for the European-wide 30th Anniversary Edition CD reissue.

Probably the most well-known cover for this album was the one that accompanied the UK, North American and other territorial releases. It features a photo of the band sitting on a park bench on an autumn day. Shot by photographer Bengt H. Malmqvist. The photo shows Benny and Frida kissing, Agnetha looking straight at the camera and Bjorn reading a newspaper. This photo was used as the inner gatefold photo in the Scandinavian release.

The park bench photo version of the album cover also makes an appearance in the 2015 science fiction motion picture ‘The Martian’ where one character gleefully announces to another in a video link that he had found an original vinyl copy of the album.

These Teens Prove They Are The ‘Queens of Noise’