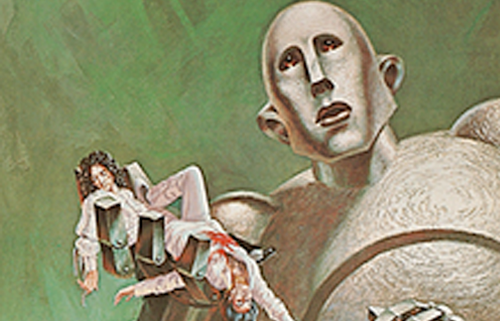 News Of The World Album Cover

Welcome to another installment of ‘Behind the Cover’ brought to you by Pure Music Manufacturing. In this feature, we examine the story of the music and artwork used for an iconic album release.

The sixth studio album for British rockers Queen was released on October 1977. The overall sound of the music contained on this disk was a departure from previous releases and was also a response of sorts to the changing musical landscape at the time. Punk rockers, including the Sex Pistols, were responsible for creating a backlash against progressive rockers, including Queen. You could say that the noise that was being generated by the punk rockers had a great influence over the way music changed at the end of the 1970s and into the 1980s. The movement pushed Queen into a morphing of their sound which moved away from their symphonic signature music to a more spontaneous hard rock sound. ‘News of the World” featured that harder, raw sounding Queen and the public loved it.

The album peaked at Number 4 on the Billboard 200 Album Chart and Number 4 on the UK Album Chart. It has since been certified 4x platinum in the United States and has sold well over 10-million copies so far worldwide. Plus, it remains one of the best-selling albums released by the band.

The lead single, “We Are The Champions/We Will Rock You” hit #2 on the UK Singles Chart and #4 on the US Billboard Hot 100 and has gone on to become a rock anthem. Rarely does a sporting event take place without a few bars of ‘We Will Rock You” not blaring in the background in a break during play.

The News of the World album cover art came from a book published in October 1953 titled, “Astounding Science Fiction” that one of the members of the band owned. The cover of the book featured a giant robot that was holding the body of a dead man. It was the work of American sci-fi artist Frank Kelly Freas. The band contacted the artist to see if he would alter the painting that would see the robot holding (and dropping) the four members of the band replacing the original ‘dead man.’ Freas agreed to the revision although he was unaware of who Queen was.

Another version of the robot painting was used on the inner sleeve where it has an extended hand about to snatch members of a fleeing audience as depicted in a destroyed auditorium. It is also interesting to note that although the cover artist admitted to being a classical music fan, he did start to listen to Queen – just in case – and later stated that he liked their music.