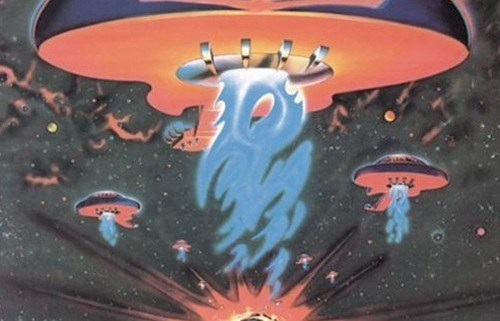 Pure Music takes a look at some of the most interesting album covers of all time. We call it “Behind The Cover” and in it we examine the stories and features behind these great pieces of album cover art.

The American rock band Boston released their debut album in August 1978. It went on to become one of the best selling debut albums in US music history. It totaled over 17-million copies sold. A total of three singles came out of the effort and extensive touring raised the band’s reputation to that of one of rock’s top acts.

What made the debut album stand out in a record store was the unique cover art. It featured a guitar-shaped spaceship that carried the city of Boston inside a clear dome. The word Boston was emblazoned across the front of the spaceship.

The original spaceship was designed by artist Paula Scher in 1976 and was illustrated by Roger Huyssen and featured lettering by Gerard Huerta. The guitar-shaped spaceship continued to be featured on the cover of every Boston album ever released with a sort of story line tying them altogether.

The debut album actually had two long lines of the guitar-shaped spaceships fleeing an exploding planet with blue flames exiting the bottom of each spaceship. On the group’s second album, Don’t Look Back, just one Boston spaceship appears. It is hovering over a landscape that could be a new planet. The spaceship has searchlights on as if it is exploring the surface of this region.

On Third Stage, the spaceship is travelling towards a larger, flat spaceship that is hovering over a blue coloured planet. The spaceship is shown smashing through a rock formation on the cover of Walk On and it is seen flying low over a planet that has turquoise rocks and a turquoise tower is visible in the distance on Greatest Hits.

The cover of Corporate America shows the Boston spaceship heading towards a planet that resembles Earth and on Life, Love & Hope, and the spaceship is viewed as flying near a nebula in outer space.

The spaceship also has been used as a giant prop during several of the concert tours all decked out with lights and additional set pieces on stage. It is anyone’s guess what the spaceship may be doing when another album is released as there appears to be no end in the musical inspiration of the current members of Boston.

One thing is for sure, not only is the music written, produced and recorded by Boston unique and trend-setting in the world of rock music, their guitar-shaped spaceship has become as identifiable as a corporate logo is to a large business entity. Which is actually ironic considering the stance the band has always had related to the politicizing of the music industry.

Pure Music Manufacturing is a CD manufacturing company based in Manchester. UK. They provide many optional CD/DVD manufacturing services including pressing and packaging. Pure Music aims to be your one-stop, affordable CD replication service. The many different packaging options they provide are designed to meet every budget and requirement.