I was originally going to use this blog to provide practical information regarding the CD, DVD and vinyl manufacturing process, however today I am going to  make an exception and talk about a very special lady, who has gone into retirement.

When we started Pure Music Manufacturing in 1992 it was the heyday of the “Madchester” scene, and vinyl was king for our clients. Our venerable Lyrec disc cutting lathe was running constantly, breakdowns and blown disc cutter-heads were a daily occurrence. At that point we did not offer CD mastering in-house, it was just vinyl mastering.

Things were much different back then, and the cost of making a 7” or 12” record was much cheaper than the cost to press CD’s. If I remember correctly it cost about £ 1400.00 to make a 1000 CD albums, and this was prohibitive to most of our clients. 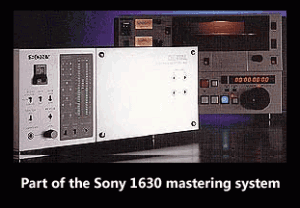 A large part of this cost was creating a CD master, and 1992 the only format you could provide to CD manufacturing company’s to input into the glass mastering machine was a PQ encoded 1630 U-matic tape, this is basically a very large video cassette. The equipment required to produce a 1630 was costly, a full editing system cost about £ 30,000. As we did not have much demand for CD manufacturing during this period, it did not make sense to invest in this type of mastering system, we would farm out our CD mastering work to 3rd party studios. We would supply them with a DAT master, they would transfer this to 1630 and add the PQ points.

However by 1994 the cost of manufacturing CD’s had started to drop, making them more attractive to our clients. Also around this time a new disc format came out, it was called CD-R or “recordable CD”, this type of disc allowed you to actually make a one-off CD. The first recorders cost about £ 25,000, and the discs cost about £ 50.00 each. It was obvious back then that this type of system would never be big in the home market (doh!), but it was a very interesting prospect for CD mastering studios, especially as the cost of the recorders and discs started to drop considerably.

The CD-R disc recording format coincided with the appearance of relatively affordable Digital Audio Workstations (DAW), these computer systems allowed you to record audio onto hard discs and perform editing of the audio! One company called Sonic Solutions pioneered this type of DAW, and this system had the option to attach a CD recorder that would allow you to make a PQ encoded CD master. CD pressing plants then started to accept these discs for glass mastering, negating the need to make a PQ encoded 1630 CD master.

The cost for a Sonic Solutions system with a CD recorder was about £ 14,000, and it started to make good business sense for us to get into CD mastering. We got the finances sorted and and were about to buy a Sonic System, but then we became aware of a small British company called Studio Audio and Digital. They had recently launched their SADiE mastering system, this was very similar to the Sonic Solutions system, but in our view much more powerful, and easier to use.

A comparable SADiE system was also much cheaper than Sonic Solutions, at about £ 8000.00. Based on our initial figures, if we used the system for 3 – 4 years, it would pay for itself and provide a tidy little profit (boy where those figures way out!), So on a cold and windy day in 1994 I made a long drive down to Cambridge to pick-up on our SADiE system and do a spot of training. 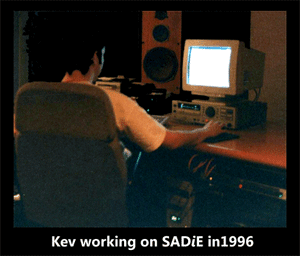 With the money we saved on buying SADiE, we could actually relocate the mastering studio to a much larger room with superior acoustics. The day we installed the system was very exciting , I remember everyone gathering around in the studio to watch this little miracle of making a “one off” CD, you could smell the excitement as the Yamaha CD recorder ejected it’s caddy that contained a disc that was promptly played in a CD player. To some it seemed like witchcraft!

Sometimes though this witchcraft didn’t always go according to plan, some CD players really didn’t like this new type of disc, particularly high end audiophile players, we learnt this the hard way. Around this time we did lots of work for a company called So What Arts, this was the management company for Simply Red, and we had been asked to provide a CD of the pre mastered mixes for the album “Life” to Mick Hucknell, his management team and the guys from Warner Music to listen to in Elliot Rashmans office.

A short time later we got a frantic phone call from one of the guys form So What Arts, he said the disc didn’t work and that we should have checked it before sending it to Mick. We had checked all the way through, so we asked them to get the disc back to us and in the meantime we would run another one. When the disc arrived back with us we popped into our CD players and it played fine.

This left the representative from the management company speechless, he couldn’t understand why the very expensive audiophile Hi-Fi system in the managers office couldn’t play the disc. We had to explain that the format was new and that high end systems that where highly tuned just didn’t like the new CD-R format, and that they should try playing the disc on a cheaper player. So back he went and dug out a cheap CD ghetto blaster from reception on which they listened to the album.

Apart from a few compatibility issues of the CD-R format, this SADiE system worked virtually without fault. I can’t recall it ever completely bombing out on us and ruining a session, in the very rare cases it crashed, the system would re-boot and you would be exactly at the point where you had been before the crash. Over the years Studio Audio & Digital would release software updates (free of charge) that would increase the power and flexibility of the system.

In 1998 we closed the mastering studio, this was for personal reasons, the studio was very successful up until the day it closed. We then moved the original SADiE system into the main office where it still performed basic editing, compilation, adding ISRC codes and various other duties. Although we have used other mastering systems since, nothing to me was as fast or stable as SADiE, and the original system we purchased in 1994, housed in a newer host computer with much bigger hard drives and newer Plextor CD-R writers, it just kept on going and going. 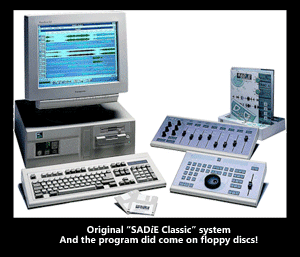 I cannot think of any other computer purchase that has performed for so long and for so well, in this day and age we replace systems that are 3 or 4 years old, but this old girl was still going strong 16 years later! To give you an idea of what an achievement this is, the heart of the SADiE classic is a AT&T DSP3210 chip that produces about 33 MFLOPS of processing power, the mobile phone in my pocket today produces about 34 MFLOPS.

For our original £ 8000.00 investment, this system produced the masters that went on to press over 40 million CD’s, and was the front end for cutting more than a million vinyl records. To be honest these are rough calculations I have done in my head, the actual figure could be much higher. So you’re probably wondering what has happened to this system, has she died, finally blown AT&T DSP3210 chip?

We have recently upgraded all of our computer systems to Windows 7, now the poor girl is still running on Windows 98, and it’s been a complete drag getting the new machines to talk to her over the network. So we have decided to put her into retirement, we discussed what to do with the system, I considered having the main XS board framed and put on the wall. Then it occurred to us that if the machine we now use for editing masters goes down for any reason, we can just plug the old girl back in as an emergency backup. And this has already happened once, cheers Windows 7.

The reason she’s no longer in daily use is not due to a hardware failure or that it’s just not up to the job any more, no it’s just because the new computers won’t talk nicely to her. I can see why they have the hump, can’t imagine they will be in our office in 16 years time.
So a big shout out to the people at Studio Audio and Digital, now owned by Prism Sound, thank you for building one hell of a workstation. The company went on to constantly improve the hardware and each revision was given a new name, the original hardware configuration released all those years ago is now referred to as “SADiE classic”, and I can understand why, it was an absolute classic system.

Today she is is packed away in a dark storage cupboard, a slightly undignified place for a system that has mastered music for some of the biggest recording artists in the world. Even I agree that placing this old computer on plinth in the office might be slightly weird. However if you happen to find yourself in our offices at some point in 2013, and you see me at my desk graced with an old beige PC box, a glass of champagne and wearing a party hat, don’t think I have gone mad, as I will be celebrating her 18th birthday. At 18 they say a girl turns into a woman, but she has always been a lady of distinction.

Masters of the universe