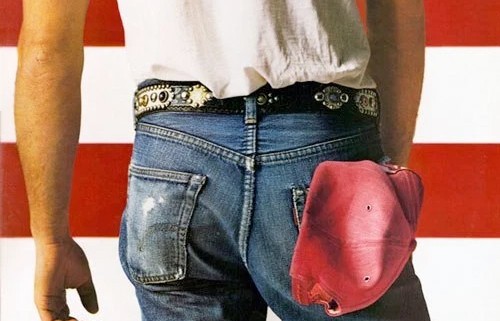 It’s hard to argue that something as dynamic as the American flag on an album titled Born In The USA is anything but iconic. This week’s instalment of “Behind The Cover” takes a closer look at The Boss and the image this album created for him and his music.

The seventh studio album for American rock singer-songwriter Bruce Springsteen was titled Born In The USA. It was released in June 1984 and was instantly a hit partly due to the incredible songwriting talent of the artist and partly due to the image that was plastered across the front album cover.

It was the title track that inspired to the concept for the album cover. Rolling Stone photographer Annie Leibovitz used the song theme for photos that captured two layers of the red, white and blue. The first layer was the US Flag, that was draped in such a manner that it created the background for the second layer. The second layer featured a partial shot of Springsteen dressed in red, white and blue – jeans, a t-shirt and a ball cap.

Several photos were shot, some with Springsteen facing the camera and some with his back to it and the red ball cap stuffed into a rear jeans pocket. The final photo chosen for the album cover was a rear view.

The powerful image of the American flag was magnified by the simple shot of Springsteen in the foreground. The combination made for an album cover that needed little in the way of explanation. If you knew the name of the album, you could spot it from across the floor of your local record store.

The album could be a greatest hits package is it contains seven top-ten singles and sold over 30-million copies by 2012. It was supported by a worldwide concert tour and is considered one of the greatest albums of all time. The cover artwork also appears on many lists chosen as one of the most recognisable images to come out of the music industry in the 1980s.

However, there was a negative that popped up along the way. Many view the album cover as Springsteen sharing his political opinion by urinating on the flag. The Boss openly denies that.

The cover did a lot to push Springsteen’s image into the music industry subconscious. The muscular arms and fit torso in jeans and a t-shirt catapulted The Boss onto the radar where he was perceived as an ordinary man. A musical everyman of sorts. It also didn’t hurt that there were also some of his best tunes on the record as well.

Pure Music Manufacturing is a Manchester UK-based CD manufacturing company. They provide various CD/DVD manufacturing services that include CD Pressing and CD packaging as well as all the options in-between. Pure Music aims to be your one-stop, affordable CD replication service and offers packaging options designed to meet your needs and fit your budget.

When A Cover Is So Iconic Others Replicate It – Elvis Presley’s 1956 Al...