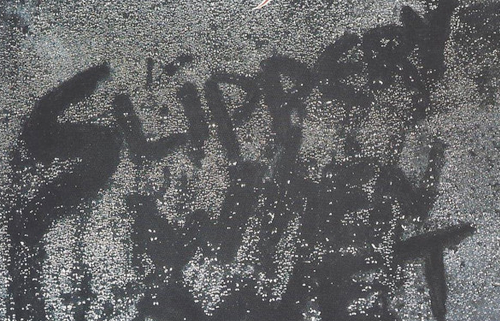 This is “Behind The Cover.” Pure Music Manufacturing takes a look at a different iconic album cover and tells you the story behind its creation. This installment will focus on the band Bon Jovi who created this top-selling disc in Canada which became a slippery entry in the album art category.

The 3rd studio album by American rock band Bon Jovi was released in 1986. It was not originally titled, “Slippery When Wet,” and actually went through several changes in identity prior to being released. At one point the album was called ‘Wanted Dead or Alive’ and an album cover was designed with that title in mind. It showed the band dressed as cowboys but the album title changed. However, the photo did end up being used when the single, ‘Wanted Dead Or Alive’ was released.

The record was recorded in Vancouver and apparently a visit to the No. 5 Orange strip club in that city led to the final title for the album. Essentially, a stripper who soaped herself up in a shower on stage after removing all her clothes inspired the album name. For some reason the connection between a slippery girl covered in soap and water and rock ‘n’ roll made just enough sense to become the title of an album that was close to being released.

Now that the band had a title they liked, it was time to have a cover designed. The original concept was to feature a busty woman in a wet yellow t-shirt. On the t-shirt was to be the name of the album. The cover art was completed but just shortly before the album was released the record company did a switch. The alternative cover art they had was a wet black garbage bag with the words “Slippery When Wet’ written in the water on the wet garbage bag. It was not only very simple, but the band later observed that the new album cover was “not very impressive.”

The switch was done as the record company feared that the wet t-shirt cover would be considered sexist so they put a bright pink border around the photo. The band was not amused and the garbage bag photo was substituted. Interestingly, in Japan, the album features the wet t-shirt cover. As does several other international original and re-released packaging of ‘Slippery When Wet.’

Pure Music Manufacturing is a CD Manufacturing company based in Manchester, UK. They offer many different CD/DVD manufacturing services including those related to pressing and packaging. The goal of Pure Music is to become your only source for CD Replication and CD Duplication services. They have designed their services to include affordable options designed to meet your project goals and budget.