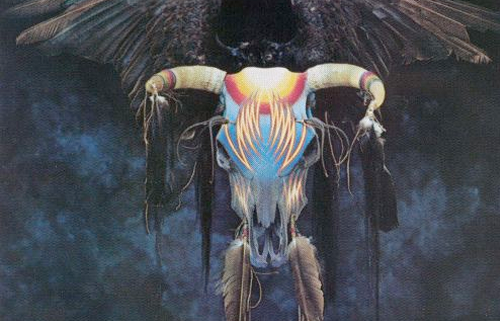 Welcome to another edition of ‘Behind The Cover.’ This is a feature where Pure Music takes a look at the story behind one of the best record covers in the past few decades. This time we will examine the unusual and haunting cover used for an album of The Eagles.

The 4th studio album released by The Eagles in 1975 was titled, ‘One of These Nights.’ It featured an image of artwork on the cover by Boyd Elder, who was also known by the pen name of El Chingadero. In the early 1970’s Elder was creating art with painted skulls and in 1972 some of his work was being shown at an art gallery in Venice, California. A number of the members of the band happened to attend the showing, having been invited to perform a song at the gallery opening.

Elder also happened to be a friend of Gary Burden who had designed the album covers for the three previous Eagles’ releases. When the time came to create the cover art for ‘One of These Nights,’ Burden approached Elder for a piece of his artwork. Two pieces were presented and one of them ended up as the chosen cover for this particular album.

The skull in the artwork was made to stand out off the cover through a process of debossing sections together with elaborate and detailed embossing of the wings and feathers. Burden said the cover was to represent a transitional phase that showed both where the band had come from and where it was going. Burden explained that the use of a cow skull was a cowboy, folk reference where the decorations on the cover were inspired by the American Indian culture. He pointed to the polished, reflective glass-beaded surfaces as representing the future.

The album cover received a Grammy nomination for Best Album Package. The record was also the Eagles’ first number one album on the Billboard album chart. It also produced three Top 10 singles including the title track, ‘Take It To The Limit’ and ‘Lyin Eyes.’ The title song was their second number one single and the album sold in excess of 4-million copies. It was nominated for several Grammy Awards and won the group their first Grammy for Best Pop Performance (by a Duo or Group with Vocals).

Bon Jovi Goes To The Trash With ‘Slippery When Wet.”
Scroll to top