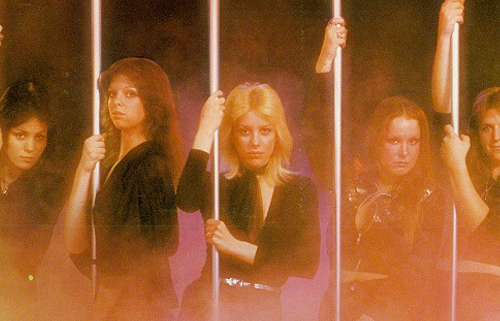 These Teens Prove They Are The ‘Queens of Noise’

This is another installment of ‘Behind The Cover.’ It is a look into the history behind an iconic album and album cover art. This feature is presented by Pure Music Manufacturing.

The 2nd studio album by American rock band The Runaways was released in January 1977. It was actually released in 3 different formats including vinyl record, Musicassette and Stereo 8 track tape. Nine of the ten songs featured on the album were either written or co-written by members of the band and a number of them ended up being featured in the 2010 movie about the band. Although the record did not have significant sales, it has been re-released on CD a total of six different times between 1997 and 2011. It also remains the best selling album of the bands in the United States. It was also the first of three albums released by the band in the same year. ‘’Live In Japan” came out in the Summer of 1977 and was originally released just in Japan and selected regions. ‘Waitin’ For The Night’ came out in October 1977.

The band members had mixed feelings about ‘Queens of Noise’ where Joan Jett claims to be “really proud” of the release as it was, in her words, “a lot more listenable” than their debut album. Guitarist Jackie Fox refers to it as “not a very good album.” Regardless, the songs that appeared in the motion picture demonstrated that early in the life of The Runaways, they were exploring well beyond their hard rock mold. The disk had examples of punk rock, glam rock, blues rock and heavy metal – all influences that helped shape the sound of the album.

The cover photo features the five female band members all dressed in matching black shirts and pants. Each girl is holding onto a long, metallic shaft in what was described as a “stripper pole album cover theme.” Smoke billowing up from the bottom of the frame acts to partially obscure the band. That particular photo was snapped at the last moment before, as Fox later explained, “we all started choking.”

The back cover photo is in much the same theme but the girls are posing differently and there is no smoke. This was originally the front cover photo with the photo with the smoke slated to be on the back cover. However, designers had an issue with the smoke. It made it difficult to read track listing information and other liner notes. The problem was easily solved when Fox suggested the photos be switched. The plain black background of the smokeless photo provided the perfect canvas for white lettering where album information could be inserted and easy to read. The logical solution was agreed upon by the record company and the photos were switched.

The World’s Best Selling Album Truly Was A Thriller