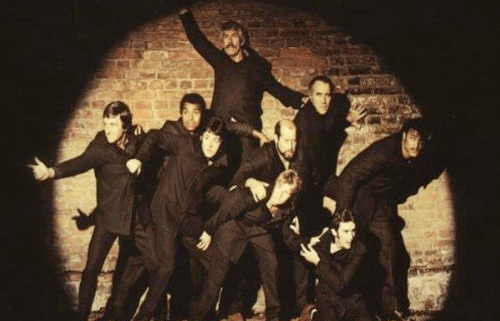 Pure Music Manufacturing proudly presents ‘Behind the Cover.’ This is where we take a close-up look at an iconic album cover and the story behind it and the music that accompanied it.

The third studio album by Paul McCartney and Wings was called ‘Band On The Run.’ It was released in December 1973 and was actually McCartney’s fifth post-Beatles album. It had average sales until two key singles were released. ‘Jet’ and the title track pushed the album up the charts where it remained for most of 1974. In fact, ‘Band On The Run’ – the album – topped the charts three different times thanks to the strength of both singles.

It went on to become the top selling album of that year in Australia and Canada. It was the #2 best-selling disk in Britain and proved that McCartney was indeed the most commercially successful of the four former Beatles. At one point, due entirely to the success of ‘Band On The Run,’ McCartney replaced George Harrison as the “ex-Beatle Most Likely to Succeed.”

The album earned triple platinum status by the RIAA and has sold in excess of 6-million copies worldwide. It is also EMI’s top-selling UK album released in the 1970s.

The album cover photo was taken by photographer Clive Arrowsmith on October 28, 1973 at Osterley Park. It shows McCartney, his wife Linda and band mate Denny Laine and six other well-known individuals. All are dressed as convicts caught in the spotlight of what is supposedly a prison searchlight. The six non-Wings people in the photo are Kenny Lynch, Michael Parkinson, Clement Freud, James Coburn, John Conteh and Christopher Lee.

Arrowsmith took a total of 24 shots which meant everyone in the frame had to hold their pose for two full seconds in order to capture the correct exposure due to the low density of the light from the searchlight. This was also compounded by the “substance haze” that each photo subject was experiencing following a party hosted the evening before by McCartney. Arrowsmith found four shots of the set that were “acceptable” and the cover was the best of those.

The fact that Arrowsmith used a regular daytime film rather than one best suited for night-time photography, gave the finished product a slight yellow hue.

Aerosmith Is Really Pumped About Their Tenth Album
Scroll to top