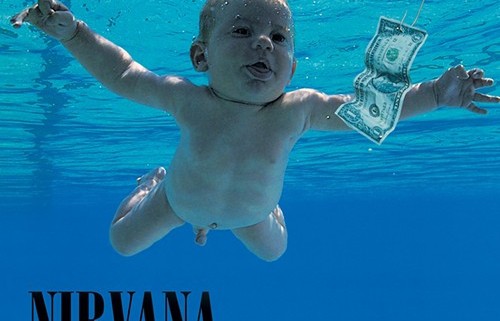 Welcome to “Behind The Cover.” This will be the start of a weekly feature here at Pure Music. Be sure to come back often to read the new instalments.

For our first post, we will be looking at the iconic album cover used for Nirvana’s second release.

Originally titled ‘Sheep” by band leader Kurt Cobain, the title changed to the grammatically incorrect “Nevermind” as the recording session progressed. The album cover concept was Cobain’s. The idea was inspired by a television program he had seen on the topic of water births.

This was shared by Cobain to their record label’s art director, Robert Fisher. That sent Fisher on a search for something suitable to use to match the vision Cobain had for the cover art. However, all that Fisher could find was stock footage and it was pretty graphic. In fact, so graphic that the record company would not clear it for use.

To make matters worse, the decision was changed to use a stock photo of a swimming baby. Once one was selected, the company that held the rights to the chosen photo wanted $7,500 per year for the use of it for the album cover.

This prompted Fisher to put underwater photographer Kirk Weddle in a swimming pool with babies to shoot an original photo. An Olympic-sized swimming pool in Los Angeles was used and Weddle was decked out in a wetsuit and set up a studio in the pool to capture the requested photo.

A total of five babies were cast for the shot and the one who ended up on the Nevermind cover was four-month old Spencer Elden. The infant’s father Rick happened to be a friend of Weddle’s.

Shooting the photo itself entailed basically tossing the naked baby into the pool and Weddle snapping photos from underneath. For this particular shoot, just five frames were shot before Weddle was convinced he had what he wanted. The fishing hook with the dollar bill attached to it was cropped in afterwards mechanically at the urging of Cobain.

The tyke was paid the standard hourly rate for a no-name model at the time, a total of $250. He did however, receive his own triple-platinum album once Nevermind reached that goal.

The back cover art shows a rubber monkey in front of a photo collage created by Cobain. The collection of photos range from shots of raw beef, images from Dante’s Inferno to some rather disturbing medical photos of female body parts.

An interesting postscript to this story is that Elden has recreated the 1991 album cover on the 10th, 17th and 25th anniversary of Nevermind. Each time he had jumped into a swimming pool naked with the exception of the 25th anniversary when the photography suggested swim shorts be worn.

Pure Music Manufacturing is a CD printing company based in Manchester UK. They provide CD manufacturing services of CDs and DVDs as well as various packaging options. From pressing to packaging, Pure Music is your one-stop, affordable CD replication service.