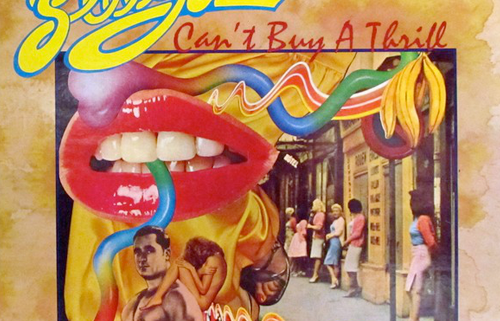 This regular feature is called ‘Behind The Cover’ and it is proudly brought to you by Pure Music Manufacturing. It is in this place where we will introduce you to the story behind one of the most iconic album covers of all-time and discuss the concept behind both the music and the packaging.

The debut studio album by American rock band Steely Dan was titled, “Can’t Buy A Thrill” but the release was thrilling on several counts. It was originally released in November 1972 in two-channel stereo as well as in a special four-channel quadraphonic mix. The two mixes contain several differences, most notably the requirement of additional lead guitar fills in the quad mix of some songs.

There were also two songs that were recorded but did not make it onto the album. They were released as a single (Dallas/Sail The Waterway). This is also the only Steely Dan album to feature more than just Donald Fagen as lead singer. David Palmer and Jim Hodder provide lead vocals on several tracks.

The title of the album actually came from the opening line of a Bob Dylan song. In “It Takes A Lot To Laugh, It Takes A Train To Cry” the phrase is used. The cover art is eye-catching to say the least. It features a photo montage that was designed by Robert Lockhart. Using the title of the album as a focal point, the photo montage includes an image of a line of prostitutes standing in a red light ‘district’ waiting for clients. That piece of the photo montage was enough to get the Steely Dan cover banned in Spain where it was replaced by a photograph of the band in concert. The giant red lips and the topless male elsewhere in the montage did not cause as much of a stir. In other parts of the artwork are long, colourful, flowing elements that hint at stretched rope candy. In all honesty, the images on the cover are confusing and have little relevance to the album content short of the waiting prostitutes and the album title.

Even members of the band found the album art to be less than stunning. It was stated by Walter Becker and Donald Fagen in the liner notes of their fifth studio album “The Royal Scam” that that album had the “most hideous album cover of the seventies, bar none, excepting perhaps “Can’t Buy A Thrill.”

The Debut Album By The Cars Races Up The Charts