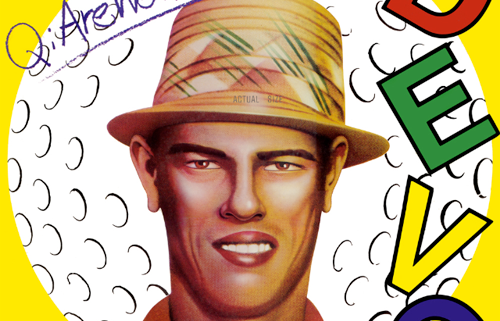 This feature is “Behind The Cover” and it is brought to you by CD manufacturing company, Pure Music. This is a place where we will examine and discuss the stories behind some of the most memorable album covers of all-time.

American new wave band Devo released their debut album in 1978. It had the awkward title of, “Q: Are We Not Men? A: We Are Devo!” and received what could only be described as mixed reviews. It only got as far as #78 on the US Billboard chart but reached #12 on the UK Albums Chart. In recent years, the album has been viewed in a very different light and has actually earned spots on several best-of album lists. It produced a total of two singles that did not fair very well but the album did sell well enough to become certified Gold in 2007 by the RIAA in the US.

The packaging for the LP came about in a rather unusual manner. The statement “Are we not men?” was borrowed from the H. G. Wells book The Island of Doctor Moreau. The cover illustration of the album was by Joe Heiner. The cover was based on an image of professional golfer Juan ‘Chi Chi’ Rodriguez. The original image was found on a golf strap and for some reason, members of the band thought it would make for a pretty funky looking debut album cover.

The record label had a very different stance on the matter. Considering that many of the top level officials at Warner Bros. at the time were big golf fans, the general feeling was that the artwork could be viewed as making fun of Rodriguez. So, a suggestion from the record label was to have the face in the portrait either be airbrushed or altered in some way to not resemble the famous golfer. Lead singer Mark Mothersbaugh pulled a newspaper clipping of a photo that morphed the faces of four different US Presidents (John F. Kennedy, Lyndon B. Johnston, Richard Nixon and Gerald Ford). They were later morphed with the original Rodriguez image. The finished product was on the cover when the album was released.

The band did eventually get permission from the golfer to use the original artwork but by then, the album sleeves were already in production and it would have cost the band too much to halt and reissue. The price tag was quoted at about $2,500 to stop the presses. Oddly enough, the original ‘Chi Chi’ illustration was on the picture sleeve of the band’s third single from the LP. The European version has completely different artwork which consists of two photographs that are similar to the stills that appear in the American version’s inner sleeve. One photo features a man wearing goggles, a bow tie and rubber gloves. The other has heads with sunglasses under nylon stockings.

Pure Music is a CD manufacturing company headquartered in Manchester, UK. They provide several different CD/DVD manufacturing services. These include pressing and packaging. Pure Music Manufacturing aims to be your one-stop CD replication service. Their packages are designed to meet both your project requirements and budget.

Steely Dan’s Debut Album Proves You Can Buy A Thrill