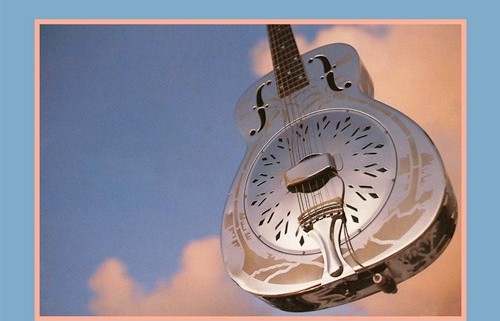 This feature is called ‘Behind The Cover’ and it is a place where we take a look at some of the stories behind some of the most memorable album covers ever created. In this installment, Pure Music looks at a classic from the 1980s by Dire Straits.

The British rock band Dire Straits released their fifth studio album, titled “Brothers In Arms” in 1985. It instantly landed at the top of the charts worldwide and spent a total of ten weeks at the #1 spot on the UK Albums Chart. It also held the #1 position on the Billboard 200 in the US for nine weeks and was #1 on the Australian Albums Chart for an incredible 34 weeks.

The cover art was fairly basic. It included a wide powder blue border with a photograph in the centre. The photo, taken by photographer Deborah Feingold, shows a floating guitar shot from a low angle with what appears to be a stormy sky up and above it. The guitar in the photo was a 1937 14-fret National Style “O” Resonator. It was the instrument owned and played by Dire Straits front man Mark Knopfler. The interesting thing about the guitar is that the “O” line was in production only from 1930 to 1941. The back cover art is actually a painting of Knopfler’s guitar. The artist was Thomas Steyer from Germany. The imagery was ‘copied’ to a great degree in 1989 by the group Brewers Droop for their ‘The Booze Brothers’ release.

The simple, yet beautiful cover art that emphasizes the guitar on both the front and back covers, makes this one of the most iconic packages of the mid-1980s. What also helped propel this disk into the record books was the five singles that came off of it. The most recognized of them was a tune which features backing vocals by Sting of The Police. “Money For Nothing” was accompanied by a video that was made-for-MTV as MTV was featured in the lyrics. The song has since been parodied.

‘Brothers In Arms’ collected several awards including a pair of Grammys in 1986 and it also took the Best British Album honours at the Brit Awards the following year. It also appears on several lists of the greatest albums of all-time.

Pure Music Manufacturing is a CD manufacturing company based in Manchester, UK. Pure Music provides CD/DVD manufacturing services in many different ways. They include pressing and packaging of your music project. Pure Music aims to be your one-stop CD replication service by providing you with affordable packaging options that are designed to meet your specific project requirements and stay within your budget.

Elton John Introduces A Fantastic Captain And A Dirty Cowboy

The Police Go Digital With ‘Ghost In The Machine.’
Scroll to top