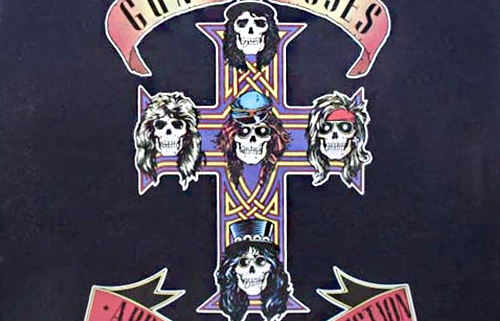 Welcome to ‘Behind The Cover’ where we take a closer look at the story behind one of the most iconic album covers of the past few decades. In this installment, Pure Music looks at Guns ‘N’ Roses.

The debut studio album for American hard rockers Guns ‘N’ Roses was titled, “Appetite For Destruction” and was released in 1987. It wasn’t until the following year when massive airplay of three singles and intense touring brought the band commercial success. The disk actually topped the Billboard 200 chart and ended up becoming the best selling debut album of all time. It also took the honour of being the eleventh best selling US album of all time and with over 30-million copies sold worldwide, it is one of the best selling records of all time.

However, the cover art was very different in the beginning.

It featured a robotic rapist about to be beaten by an avenger made of metal. It was inspired by the painting Appetite for Destruction by artist Robert Williams. The fact that a number of music stores refused to stock the album prompted a compromise of sorts. The record company decided to move the controversial cover to the inside of the album and chose a unique alternative.

White explained in an interview almost thirty years later that the idea for the skulls to represent the band members came from Rose. The detailed knot work which was within the cross was meant as a reference to the band Thin Lizzy that happened to be a favourite of both the artist and Rose.

A series of photographs on the back cover and on the liner notes were all taken by photographers Robert John, Greg Freeman, Leonard McCardie, Jack Lue and Marc Canter. A reissue of the vinyl album in 2008 was to feature the original album art on front but the record company changed their minds at the last moment and stuck with the cross and skulls version.

According to the band, the original artwork was a symbolic social statement with the robot representing the industrial system. They said that the robot was shown to be abusing the environment in many ways including through pollution.

As if the album didn’t have enough controversy, Rose admitted in an interview in 2011 that his original concept for the cover art was a photo of the explosion of the Space Shuttle Challenger but clams the record company nixed it saying it was in bad taste.

Pure Music Manufacturing is a CD manufacturing company in Manchester, UK. They offer several different CD Manufacturing services which include pressing and packaging. Pure Music’s goal is to be your one-stop source for CD Replication, CD Duplication service. They have designed their services to include affordable options that will meet your needs and budget.