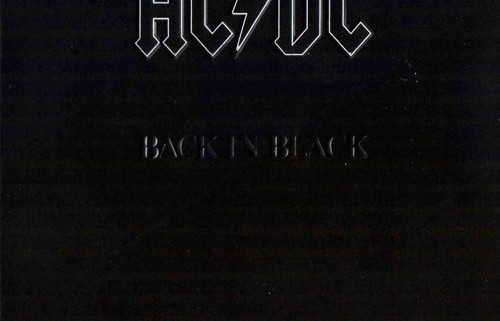 Welcome to another installment of ‘Behind The Cover.’ This Pure Music feature explores the stories behind some of the most iconic album covers ever created.

Australian rock band AC/DC made their commercial breakthrough with an album titled, “Highway To Hell” released in 1979. As the band was about to record their follow-up to that successful LP, tragedy struck. Lead singer and songwriter Bon Scott died from alcohol poisoning in February 1980. Rather than disbanding, the group auditioned and hired a new lead singer, Brian Johnson. The move proved to be successful as Johnson also brought with him songwriting talents that meshed with the other writers in the band.

Just five months later, AC/DC released “Back In Black.” This became their seventh studio release and has since sold an estimated 50-million copies worldwide. In fact, it is one of the best-selling albums in music history.

However, the album cover art almost didn’t get released. The band chose an all-black cover design and stated it was meant as a sign of mourning for their fallen band mate, Scott. The record company saw it differently and simply disagreed with the cover design.

The band stood firm and would not budge but eventually did relent slightly. According to band member Angus Young, the band offered a partial solution although Atlantic Records didn’t quite understand the way in which the cover was designed. Looking straight on all you could see was a shiny black surface but if you tilted the album in the light you would see raised lettering.

The lettering had the band name and album title in large fonts to fill the entire space of the cover. Even with the raised lettering the record company was not enthusiastic about the look of the cover. So the partial solution that was offered by the band was to put a grey outline around the “AC/DC” logo on the top of the cover.

Atlantic Records gave it a nod although very likely reluctantly so.

Regardless, the all-black (with a little grey) album cover actually stood out wherever it was on display. In fact, it became one of the most recognized album covers in music and has appeared on several lists of the best album cover designs ever released. What didn’t hurt was that the music contained on the album was as iconic. As a result, “Back In Black” also appears on many greatest albums of all-time lists.

Since it was originally released in 1980, the album has been reissued and remastered multiple times and has most recently been re-released for digital distribution. What has also catapulted AC/DC into the realm of one of the most successful rock bands in history is that they have always provided their entire catalog for use in movie soundtracks.

Pure Music Manufacturing is a CD manufacturing company based in Manchester, UK. Pure Music offers several different CD/DVD manufacturing services. These services include pressing and packaging and they aim to be your one-stop CD replication service based on their ability to provide affordable packaging options to fit every requirement of your project and budget.

Van Halen Jumps Into The Future With “1984.”
Scroll to top