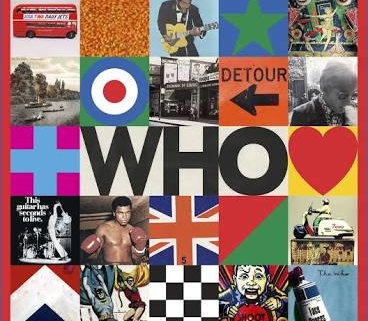 WHO Album Cover By The Who

Welcome to Behind The Cover. This regular featuring is brought to you by Pure Music Manufacturing and features a look into the story that revolves around the cover art of an album released in the past few decades.

“WHO” is the twelfth studio album released by English rock band The Who. It went to market in December 2019 and is the first release of new material by the band since “Endless Wire” which came out 13 years ago in 2006. The Who intend to back the album up with a tour in 2020 which will cover the UK and Ireland.

The WHO album cover art is rather interesting and tells a great story. It was designed by pop artist Peter Blake who has also worked on The Who’s “Face Dances” album cover and is probably best known for The Beatles’ “Sgt. Pepper’s Lonely Hearts Club Band” cover. The design for “WHO” involves a patchwork of 25 different squares. Of those, 22 of them contain different coloured images that surround three squares in the centre that spell out “WHO.”

The 22 squares feature iconic images that can be considered connected to the band or the band’s culture in one way or other. For example, one square has the Union Jack flag in it. Another has a pinball machine (hinting at the 1969 Who song “Pinball Wizard”). There is one that shows baked beans as a reference to the band’s 1967 “The Who Sell Out” album cover. One more contains the advertisement poster that was released with the band’s 1979 “The Kids Are Alright” album.

One image features a scooter which hints to the band’s 1973 album “Quadrophenia” which featured a mod scooter on the cover. There’s also an image that shows the band’s 1981 “Face Dances” cassette edition cover art.

Cultural references include images of comic book heroes Batman and Robin, musician Chuck Berry and boxer Mohammad Ali. There is a curious image in one of the squares which shows a traffic sign that says “Detour.” This happens to be the title of the fourth track on the album. It also provides a throwback nod to the band’s earlier name, The Detours.

There is no doubt that this album cover contains more history of The Who than any other album cover that has been produced prior to it. The patchwork design is not new. Variations of it have been used many times in the past as a means to get a lot of information into the space of an album cover. One example is Sheryl Crow’s 1993 “Tuesday Night Music Club” album cover which spells out the artist’s name, features photos and other items in the patchwork design.

Pure Music Manufacturing is a CD manufacturing company. Based in Manchester, UK, they are able to handle all your CD replication services. This includes pressing and CD packaging. Pure Music aims to be your solitary source for these services and has created packages to meet your specific project requirements as well as your budget. Contact them today for details.