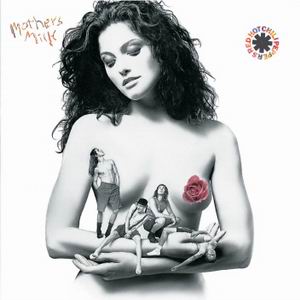 Pure Music Manufacturing proudly presents another edition of Behind The Cover. This is a look at the story behind the music and the artwork that went onto the cover of an iconic album that was released in the past few decades.

The fourth studio album by American rock band Red Hot Chili Peppers was released in August 1989. It was titled “Mother’s Milk” which went on to become a commercial success that surpassed that of their previous three releases. The album peaked at Number 52 on the US Billboard 200 Chart and thanks to the strength of two singles (“Knock Me Down” and a cover of Stevie Wonder’s “Higher Ground”) it became the band’s first gold record.

As for the cover art, the album featured a black and white photo of the band sprawled across the arms of a much larger nude female. A rose hides one of her nipples where vocalist Anthony Kiedis’s standing pose hides the other. There had been two different models who were photographed and were going to be used on the cover. One was Kiedis’ girlfriend Ione Skye and the other was a model named Dawn Alane. Alane’s photo was the one chosen and she created the first wave of controversy over the album cover by claiming she had not been notified that her photo was being used.

The second wave of controversy came from various national retail chains that refused to stock or display the album. They reasoned that the female model on the cover was showing too much skin. This was remedied when a slightly censored version of the cover was released. The original controversy probably helped sales from retailers that were not spooked by the cover.

It was a promotional poster from the 1960s that inspired the album cover. Kiedis, who had the Sly and the Family Stone poster, liked that in it Sly Stone is featured holding a miniaturized band in the palm of his hand. When choosing the individual band members’ photos for the “Mother’s Milk” cover, guitarist John Frusciante said no to each photo shown to him. He finally settled on a shot of him seated and laughing. The rest of the band was easier to please than that.

A limited number of posters were used to promote the album only the cover art used had been altered to expose the model’s breasts. When the model caught wind of this, the third wave of controversy was created with a lawsuit. The band paid out a $50,000 settlement and the posters quickly became collector’s items.

The album cover art inspired the sleeves for the two singles that were released. Each had elements borrowed from the cover which acted as a theme tying the singles to the album.

In The Dark Album Cover
Scroll to top