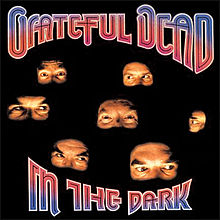 Band Becomes Grateful For Being “In The Dark.”

Welcome to a new article on music and art. Called Behind The Cover, it takes a closer look at the music and cover artwork of an iconic album release. This regular feature is proudly presented by Pure Music Manufacturing.

For a band that has been around for what seems to be forever, their twelfth studio album turned things around. Titled, “In The Dark,” the album was released in July 1987. It was the Grateful Dead’s first release in six years and their first studio album in seven years. It peaked at Number 6 on the US Billboard 200 Chart to become the band’s only top ten album. One single from it, “Touch A Grey,” went to Number 9 on the Billboard Hot 100 Singles Chart making it the band’s only top forty single. The video for the single received considerable airtime on MTV and two other singles were popular on album-oriented rock stations.

To say this disc was an unexpectedly popular release would be putting it mildly. “In The Dark” came out of nowhere and ended up being certified double platinum in the United States.

One of the interesting facts behind the music on this album is that most of the songs recorded had been played live in concert by the band for at least the previous four or five years. In a way, that gave the band an edge compared to those who go to the recording studio with just a few ideas and attempt to pen songs on the spot for a specific album release.

The title of the album, “In The Dark” tells a bit of the story behind how the album came together. Since the music was not new to the Dead, they chose to record the baseline tracks in a darkened, empty theatre. They were on stage with the same lighting as would typically be used on tour. The idea was to create a comfortable setting to record and to capture the feel that the band already had for those songs having played them live to audiences already.

The cover art for the album was designed by Randy Tuten. He designed the lettering on the cover in such a way that it formed the shape of an eye. Then inside of that shape are several photographs of individual eyes. Each of those eyes belongs to a different member of the band. However, if you are a keen Dead Head, you will notice that there happens to be an extra eye in that design. The band had a lot of fun with that one. Over the years, members of the band have stated that the extra eye was that of Ayatollah Khomeini.

Eventually, they fessed up that the spare eye belonged to Bill Graham, the band’s long-time promoter. The LP version of the cover art shows the eyes right side up. However, when the album was released in 1987 in CD format, the artwork got altered and the photos of the individual eyes are all upside down.

There’s a Riot Goin’ On Album Cover
Scroll to top