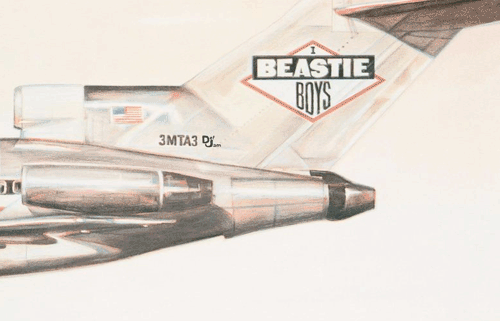 Pure Music Manufacturing is proud to present ‘Behind The Cover.’ This is a feature where we explore the details behind the music and the cover art of some of the top album releases in the music industry.

American hip hop group Beastie Boys burst into the music industry with their debut album in November 1986. It was titled ‘Licensed To Ill’ and holds the distinction of being the first ever rap album to top the Billboard album chart. It went on to become one of the fastest-selling debut records in Columbia Records’ history. The RIAA certified it with the Diamond designation in 2015 for shipping over 10-million copies in the US.

It produced an incredible seven singles including the eventual party favorite and unofficial anthem “(You Gotta) Fight For Your Right (To Party).” It peaked at #7 on the Billboard Hot 100 chart and has been named one of the ‘Songs That Shaped Rock And Roll’ according to the Rock and Roll Hall of Fame.

But there was a time in the beginning of the sessions for this album that it did not have the title it was released under. In fact, the group had originally wanted to issue their debut album with the title “Don’t Be A Faggot.” Well, for obvious reasons the record label refused to issue it and used bully tactics to pressure their manager Russell Simmons – who was also the head of Def Jam Recordings, which co-released the disk with Columbia – to change the name. In fact, accounts of the exchanges between all parties at the time appear to indicate that the Beastie Boys were actually forced to change the title. It turns out that the Boys have since apologized for the first title, although it was never used.

As for the album art, this is an interesting piece. The front and back features the group’s private jet crashing head-on into the side of a mountain with the point of impact drawn to resemble an extinguished joint. Rick Rubin, the album producer, got credit for coming up with the idea which was inspired by the Led Zepplin biography titled, “Hammer of the Gods.” It was designed by Stephen Byram and World B. Omes and has been featured in many ‘best of’ album cover art charts, lists and the book ‘100 Best Album Covers’ by Storm Thorgerson and Aubrey Powell.

In a case of imitation being the sincerest form of flattery, the ‘Licensed To Ill’ cover art has been redone as an homage to the Beastie Boys on the 2018 album by rapper Eminem titled, “Kamikaze.”

Pure Music Manufacturing is a CD manufacturing company. They are headquartered in Manchester, UK and provide various CD/DVD manufacturing services. These services include pressing and packaging of your product. Pure Music wants to be you single source for all of your CD replication requirements and have designed their packages specifically for you. Their goal is to offer you an affordable and effective production choice that meets the needs of your project.