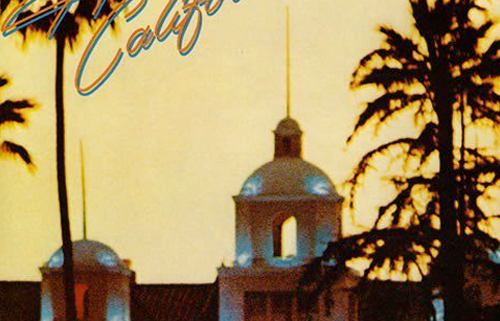 This is ‘Behind The Cover’ brought to you by Pure Music. This is a feature where we will take a closer look at the history and design of one of the most iconic album covers of all time.

American rock band The Eagles released ‘Hotel California’ in December 1976. It was their fifth studio album and is considered to be one of the best-selling albums of all time. A total of three singles came from it including two that topped the Billboard charts at #1 – ‘Hotel California’ and ‘New Kid In Town.’ ‘Life In The Fast Lane’ reached #11. The album has been certified 26x Platinum in the United States and sold over 42 million copies worldwide.

Photographer David Alexander shot the front cover photo of the Beverly Hills Hotel just before sunset. Design and art direction for the cover was provided by Kosh. The story behind the cover reveals that there were a total of three different hotels photographed. Band singer/songwriter Don Henley had requested that the photo be of a place that could portray the Hotel California of the album title but with a slight twist. He wanted one to “portray it with a slightly sinister edge.”

The selected photo took a bit of work to achieve according to the photographer. The image was shot from an angle of 60 feet above Sunset Boulevard thanks to the use of a cherry picker. One of the reasons for the angle and sunset lighting was to help disguise the actual location and hotel. However, the identity of the photo subject was eventually revealed which resulted in a threat of legal action from the hotel.

Then there’s the rear cover. That photo, along with the gatefold, was shot in the Hollywood Lido Hotel lobby. The gatefold features the members of the band and a number of their friends. Conspiracy theories have circulated as to the identity of the shadowy figure that appears on the balcony above the lobby. The addition of extras in the one shot was inspired by Henley who “wanted a collection of people from all walks of life” in the photo. He added at the time his plan was to include “people on the edge, on the fringes of society.”

The Hotel California logo on the front cover was contributed by Kosh who tried to fashion it in the format of a neon sign. Since real neon tubing was difficult to bend to the selected font, airbrush work by Bob Hickson achieved the desired effect. The logo became as iconic as the album cover having been used in much of the band’s promotional material related to the disk.