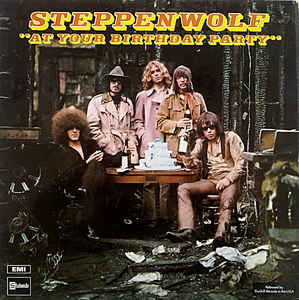 Here is another installment of Behind The Cover. Brought to you by Pure Music Manufacturing, this feature examines the story behind the music and the cover art that can make or break the success of an album release.

The third studio album by Canadian-American rock band Steppenwolf was released in March 1969 and was titled, “At Your Birthday Party.” It’s not clear what the title was referring to or if it had any specific meaning.

The album wasn’t as big a hit with fans as their previous two were, but it did contain three singles that became well-known. They included “It’s Never Too Late,” “Jupiter’s Child,” and “Rock Me.” The latter one had been featured a year prior in the movie Candy. This album turned out to be the band’s last top ten record and contained their last top ten single. However, Steppenwolf did gain a fair deal of popularity in the 1970s with their hard rock sound.

Art director Gary Burden designed the album cover. The original album was a gatefold that featured a punch-out front cover. The punch-out revealed a band photo which was also part of the inner sleeve artwork. The band photo used in the original was shot by Henry Diltz. The scene shows the members of Steppenwolf sitting on the remains of amplifiers and musical equipment in a charred house following a fire that destroyed the room the photo was taken in.

In reality, the house was owned by Canned Heat and a fire in 1969 destroyed it and the rehearsal studio that was used for the photograph. The photo of Steppenwolf is also interesting in that lead guitarist Michael Monarch did not attend the photoshoot. As a result, a stand-in was required and since the band’s producer, Gabriel Mekler looked a bit like Monarch, he filled in wearing a pair of sunglasses to further hide his true identity. Even the sharp-eyed fans of the band didn’t notice the switch.

When the album was reissued in the 1980s in CD format, the record company didn’t go with the original band photo in the burned-out remains of a rehearsal studio. Instead, there was an original piece of art that was supposed to be on the album but didn’t get that far. The record company chose to bring it back to life. Known as the “war mouse painting,” it features a US Civil War trenched battlefield with cartoon mouse heads placed onto the bodies of the soldiers in the scene. Rick Griffin gets credit for the work which he was going to paint a final version of for the album but the record company refused to pay for the painting. It opted to use the black-and-white version instead.

A Farewell To Kings Album Cover
Scroll to top