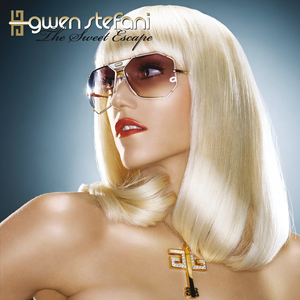 Pure Music Manufacturing is proud to present this instalment of “Behind The Cover.” It is a feature where we explore to story behind the music and cover art of an iconic album released in the past few decades.

“The Sweet Escape” was the second studio album released by American singer Gwen Stefani in December 2006. Stefani, the lead singer for the popular group No Doubt, had released her first solo disc in 2004 and had intended to return to the band following it. However, there was still some songs leftover from the writing sessions for her debut solo disc “Love. Angel. Music. Baby” she chose to release another album which sounded much like the first with modern pop music. It received generally mixed reviews and major criticism for sounding too much like the previous release.

The first single, “Wind It Up” had moderate chart activity around the globe but the album title single did much better. It soared to the Top 5 in the US, Canada, and Australia and peaked within the Top 20 in the UK. A tour to support the album visited North America, Columbia, Australia, Asia, and Europe.

Photographer Jill Greenberg took the album The Sweet Escape cover photo. The image was one of many promotional photos she had taken that were inspired by her End Times exhibition. The way Greenberg was able to capture the images for End Times was simple – she would give a toddler a lollipop then eventually take it away and photograph the emotional outbursts that followed. In an odd twist, Greenberg was accused of child abuse for using this method. Stefani spoke out in support of the photographer calling her work “beautiful” and adding that everyone cries.

The look of the album cover, in particular, the styling of Stefani, was inspired by a character that appeared in the 1983 motion picture “Scarface.” In it, actress Michelle Pfeiffer portrays a cocaine addict named Elvira Hancock. Stefani stated at the time that she was first struck by the inspiration when she was shooting the music video for “Cool.” During the filming, Stefani saw one of her No Doubt bandmates with his girlfriend who was wearing a long, peach, polyester, late-70’s style dress. It was the dress that caused Stefani to think about the Scarface character which later became an inspiration for the cover photo.

In the photo, Stefani is wearing a pair of oversized sunglasses and said they were intended to represent her “guarded exterior” with other images in the photo meant to symbolize some of her many emotions.

Pure Music Manufacturing is a Manchester-UK-based CD manufacturing company. They are capable of taking your next music project and handling all the CD/DVD replication services it needs including pressing and packaging. Pure Music wants to be your one source for all of these services and has packages designed to meet the needs of your project and fit within your budget. For more information on how they can assist with your project, contact Pure Music today.