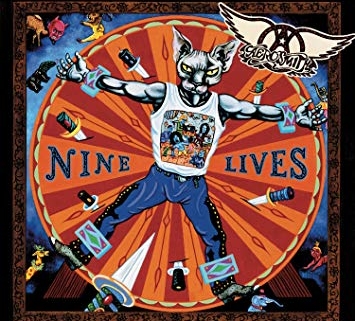 Aerosmith Gets Through Controversy Thanks To ‘Nine Lives.

This is “Behind The Cover” where we explore the details behind both the music and the artwork of an album that has become iconic since it was released. This regular feature is proudly brought to you by Pure Music Manufacturing and this time digs into the album “Nine Lives” by Aerosmith.

The twelfth studio album released by American rock band Aerosmith came out in March 1997. It was titled, “Nine Lives” and it peaked at the Number One position on the Billboard Top 200 Chart. The single, “Pink” earned the band a Grammy Award for the Best Rock Performance by a Duo or Group with Vocal.

There were a total of six singles to come off of the album including the catchy first release “Falling In Love (Is Hard on the Knees)” although many critics panned the album. Words like “perfunctory, over laboured and tired” were used to describe the sound, quality of the songwriting and the production of the album. But you know what critics are like, if they hate something, it usually becomes popular and successful. Fortunately, other reviewers simply raved at the work claiming that “Nine Lives” was a tremendous collection of Aerosmith songs that would please the average fan with rock and rock ballads.

There was a controversy that came from the likeness on the cover art. The original cover art had been inspired by a painting that appeared in a book by A. C. Bhaktivedanta Swami Prabhupada. The painting depicted Lord Krishna dancing on the head of the snake demon, Kaliya. The Krishna figure had the head of a cat and female breasts and it generated a protest by the Hindu community that felt the artwork was offensive.

The source of the artwork had been unknown to the band and the record company issued an apology which was followed by subsequent prints of the cover art to be altered and parts completely removed from both the cover and the booklet that came with the release. The new cover shows a circus knife-throwers wheel with a cat tied to it. Oddly, that image did not raise the hackles of animal activists which would have made for another interesting round on controversy.

A booklet that was part of the release contained a total of 12 pieces of album art, including the cover. The pictures were created in such a way that each contained a smaller version of the previous artwork within itself. So as you flipped through them, you had a small reminder of the previous page regardless of where you were in the booklet. The final picture of the 12 is including in a smaller form inside the first picture which ends up creating an infinite loop of art. The designer for this was Stefan Sagmeister.

The Beatles Needed Little Help With This Album
Scroll to top